Remember the game Minesweeper? It usually came as a stock game on your new Windows computer…think about it for a minute. 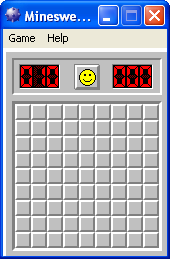 Every now and again, as a self proclaimed non gamer (who still enjoys games), I like to take a step back and salute the games that made me the woman I am today. Minesweeper was one of those games I NEVER beat. There were no hardcore graphics, no bloodshed, no friends to link with online any play in unison. The point of the game was to identify all of the bombs without..um…blowing up? I had to reinstall Windows xp on a computer the other day (don’t you judge me) and decided to give Minesweeper one more try. Boom! I won! So the logic is to flag and identify the bombs based on the numbers you reveal. There were tons of threads online featuring people like myself who couldn’t beat the fucking game! Inevitably, once you get the concept, it’s much easier. Anywho, if you sucked at Minesweeper, drop me a line and share some of your favorite old school difficult games.

View all posts by DropaJewel