Last night I had the opportunity to watch The Dirt, a Netflix biopic on the infamous 80s rock band Motley Crue. The book turned movie gave us a glimpse into the craziness of the bands plight to fame, struggle with drugs, and victory over an industry that is known to make or break people. I’m familiar with bassist Nikki Sixx as I follow him on most social media, various podcast, and glanced at Heroin Diaries. This film allowed me a peek into the lives of the Tommy, Vince and Mick to get some of the scoop. Anyone who loves the cru should visit Netflix to check it out and share their thoughts…and read the book. 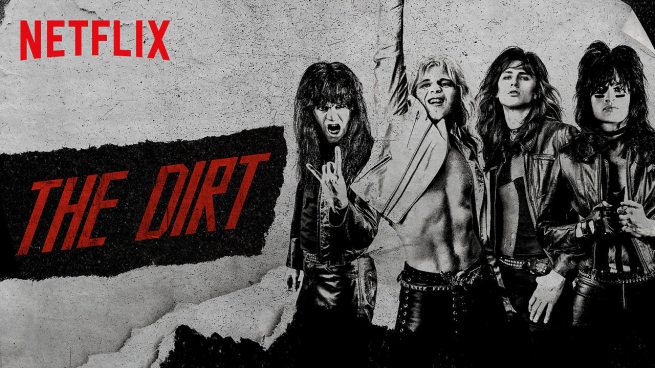 Personally, I’m in love with music biopics; the world needs more of them! I think they feed the celebrity worship that this generation fiends for. I think they take us back to when we bought that first album or that first concert ticket and the nostalgia surfaces. I think they serve as inspiration to watch humble beginnings and stadium fantasy endings. I think they tie up lose ends for those who were forced to deal with their favorite band breaking up, or the death of a member. In my lifetime, I’ve seen a bunch of  loosely done biography music movies and it introduced me to older artist. Anybody remember JLo in Selena? Who could forget Angela Bassett as Tina Turner in Whats Love Got To Do With It? What about Jersey Boys or Ray? Bohemian Rhapsody was a blockbuster and it brought together a shit ton of generations touched by Queen’s music.  I see no down sides when it comes to these types of films as long as they do it while folks are alive to give their input (if they can).

I can’t salute this lady enough. Missy Elliott has been a innovator and trendsetter in the hip hop and pop culture for eons now. She has ALWAYS been light years  ahead of the music industry with her creativity and I feel like she hasn’t gotten the respect she deserves. It’s odd to me that her name doesn’t come up in the 10 top femcee conversations or anything. What gives?!

In any event, check out her new video featuring Lamb titled I’m Better.

Also, check out the trailer for her upcoming documentary. Salute Queen!

Check out Hip Hop Now’s review of The End of Malice. It’s the story of (No) Malice of the hip-hop group The Clipse and why he left. I saw the documentary myself some time ago and thought it was dope. I’ve always had nothing but respect for The Clipse and I respect No Malice’s decision. The documentary is currently available on Netflix. Follow Vegas on Twitter and Instagram @Vegasworldinc and visit his blog hiphopolitic.com. #DoItNow

Peace! The big homie Vegas is back with his review of the documentary All Things Must Pass:The Rise and Fall of Tower Records. Check it out and show your twitter love @Vegasworldinc and his site HipHopolitic.com. #DoItNow

Vegas is back with Hip Hop NOW installment, reviewing the documentary Murder Rap. I literally can not keep up with some of these hip hop docs, but props to Vegas for putting me on game. I was a sure fire Biggie fan, and I think it’s always interesting to see the small details that documentaries can add and open up discussion. Show your twitter love @VegasWorldInc and peep his blog hiphopolitic.com.

Michael Moore’s documentaries are always eye opening and game changing, in my humble opinion. I remember watching Bowling for Columbine just shaking my head at the world wr live in. Regardless of box office sales I will probably check this one out as well.